The Blog about Dreamers United
Paul Hood / Flickr
This site can be added to the homescreen.

What are these remarkable coincidences while we're asleep?

There's something very few people know about dreams. Of course, with dreams I mean the adventures we go on while we sleep, but forget the moment we wake up. It appears that without any discussion beforehand, people can still dream the same dreams. As I see it, their dreams synchronize. It reminds me of pendulum clocks doing something similar. You may not know this either, so let's first start with this amazing tale of synchronizing pendulum clocks.

The tale of pendulum clocks

Some 350 years ago, clock maker Christiaan Huygens, discovered that his pendulum clocks could automatically synchronize the swing of their pendulums. That was an amazing discovery! Up to today, it's still miraculous to imagine this. For example, if clocks start out on different beats, or even moved at different speeds but synchronize, it means there's a transfer of energy between the two clocks; one clock slows down and the other one speeds up.

Huygens called it "the sympathy of things." I learned about this in physics class in high school. From there on, it immediately jumped to how light travels like waves, which physicists find much more interesting. To me, different objects synchronizing their behavior is just as interesting, if not more.

Back to the topic of dreams. When small groups of people share their dreams of the night, oftentimes, it happens that the dreams synchronize. To give an example, imagine you're dreaming of riding a horse with three legs through the local mall. To your mutual surprise, somebody else dreams exactly the same thing in the same night. That's a sync.

Syncs with dreams always come with the question whether it's a regular coincidence or one that's significantly different from chance to count as meaningful. Even when two dreamers report exactly the same dream, it can still be argued that it's just an ordinary coincidence. Some dream themes are common enough that at any given moment, some pair of people somewhere will both have a common dream. However, in the wild, most people dream far more personal dreams.

What exactly counts as a sync with other dreamers, in the end, depends so much on personal situations and backgrounds that dreamers themselves are in the best position to decide. That's exactly how it's done on Dreamers United, the online platform for dreamers. The dreamers decide whether or not their dreams sync. If both dreamers consider the shared content to be remarkable enough to call it a sync, it becomes a sync.

Dreamers United recently registered the 500th sync. To be clear, that number includes not just dream-to-dream syncs, but also dreams that sync with events in the life of another dreamer. They're documented in the same way. On the surface they look the same too. Five out of every six syncs are the dream-to-dream type, the remaining syncs are of the type that makes people wonder whether others are spying on them. That sounds more exciting than it really is. 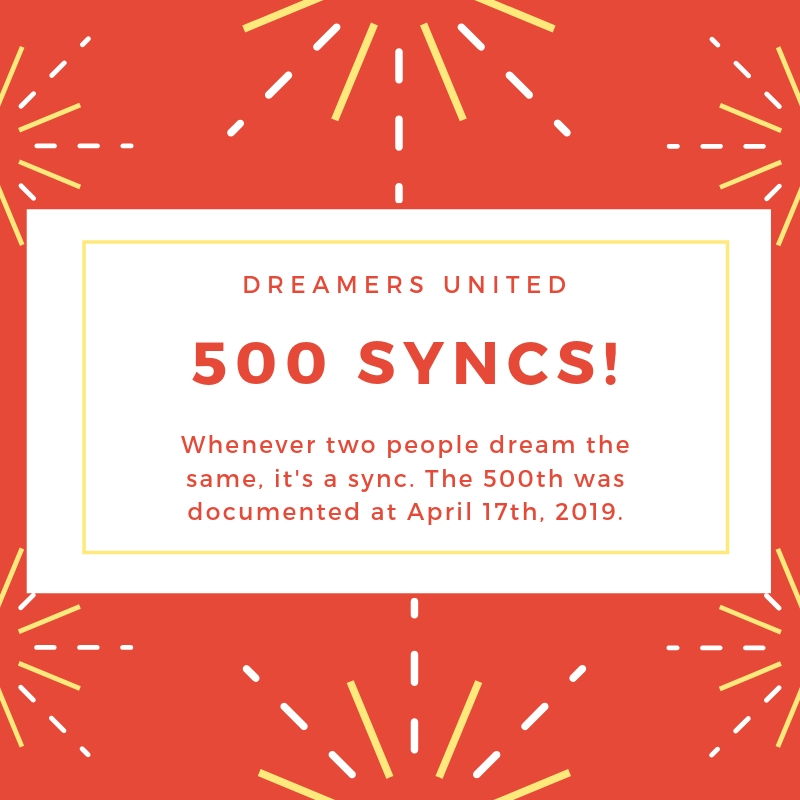 To be fair, the phenomenon of syncing dreams in itself is not a new discovery. Systemically collecting and documenting them online is however a new development.

The experience of syncing

We have yet to analyze these 500 syncs, but a few insights can already be shared just from our personal experiences with them. Syncs happen all the time and if they happen all the time, it becomes harder to dismiss them, even though they disturb some strongly held assumptions about our reality. Many dreamers, not all, go through an adjustment process to come to terms with syncs.

Similar to the pendulum clocks, dream syncs also suggest that some kind of communication takes place too. Energy possibly exchanges and in a way there's a kind of oneness established. It feels bold to write this down.

Sometimes we can tell when a dream likely has a sync. There's just something in the dream that does not fit our personal style of dreaming. It's like something foreign is inserted into the dream. That's usually the part for which a dream by another dreamer will sync.

There's also something soothing and touching about the phenomenon of dream syncs. It's so surprisingly effortless to experience syncs! They also demonstrate that we're not quite alone, not even - or perhaps I should say especially - when we're asleep.

My name is Harry Bosma. We collect dreams on an online platform called Dreamers United. If you're interested, just let me know or simply sign up and I'll get back to you. You can also sign up for the newsletter that I send out every few months or you can follow me on Facebook.

There's no comment section yet for this blog. As you probably arrived here from a post on social media, why not simply leave a comment there?